It snowed yesterday and the day before and the day before that. Snow, snow, snow. Some people say that there are as many as 52 names for snow in Inuktitut. That may be an exaggeration but there seems to at least be these ones: aput ‘snow on the ground’, qana‘falling snow’, piqsirpoq ‘drifting snow’, and qimuqsuq ‘a snow drift.’
We should have more names for snow. For example it would be good to have a name for disappearing snow. That’s what’s happening here today and, though I complained about being housebound, about the slippery streets, and about the cold, I’ll be sorry to see it go, because soon I’ll start worrying about whether the coming summer is going to bring us the heat waves and forest fires we saw last year.
In Orman Pamuk’s poignant political thriller Snow, “the silence of the snow” is a theme throughout the novel. The Snow Palace Hotel, where the protagonist Ka stays, is in the snowbound city of Kars. The snow symbolizes a world which is cut off from the outside world and also the apathy of its residents.
Snow is often used as a symbol in literature. I recently read Edith Wharton’s wonderful 1911 novel, Ethan Frome, set in a town in which winter represents isolation and unhappiness, yet there is also reference to “the crystal clearness” of the winter. In Shakespeare snow can refer to purity, chastity, or the decline of old age.
Snow can have positive or negative implications or sometimes both, as in the final words of James Joyce’s The Dead: ‘His soul swooned slowly as he heard the snow falling faintly through the universe and faintly falling, like the descent of their latter end, upon all the living and the dead.’ Some critics have claimed the snow here represents death and desolation, but surely it also suggests the opportunity for renewal and another chance. Sometimes the bleakest scenario offers the chance to turn things around.
That’s how I see it. Sometimes things seem hopeless, like yesterday’s New York Times article on global warming entitled “Time to Panic,” yet I am determined to believe that individual action can prompt political action and we can turn things around.
I’m going to keep in my mind the image of the beautiful labyrinth that artist and poet Sophia Rosenberg created on Lasqueti Island last week. 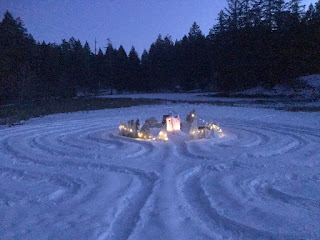 The labyrinth path shows a journey that offers a return and a new beginning. But we have to stay on the path. We have to keep putting one foot in front of the other. We have to think seriously about our footprints.