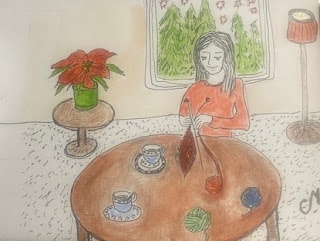 Despite a few haphazard attempts, I’ve never been any good at knitting, but I was pleased when my granddaughter proposed that it was something we could do together. I told her I could teach her how to knit and pearl so that we could make some of those little six-by-six dishcloths, and then she could find a real knitter to teach her. My friend and knitting guide Trudy dropped off a couple of balls of cotton wool and some knitting needles, and so we began.

At this time of separation and isolation, it feels good to be knitting. Through the years, many people have found solace in this activity during stressful periods. My granddaughter points out that knitting is a lot like life in that sometimes you have to go back and redo a couple of rows before you can move forward.  My own tendency is just to blunder on, ignoring the mistakes, which is why my granddaughter will be a better knitter than I. And a better human being.

Knitting has long been recommended as a cure for boredom. Theatre critic, writer and satirist Dorothy Parker took her knitting with her everywhere. In reviewing a forgettable production, she advised her readers, “If you don’t knit, bring a book.”

Although it helps with stress reduction, there’s a dark side to knitting. Virginia Woolf thought of knitting as therapy. Early in 1912 she reported to Leonard Woolf, before they were married and shortly after she had been in a rest home, that “Knitting is the saving of life.” That worked until 1941, when Virginia took her own life, drowning herself in the river Ouse.

Years ago, I used to watch one of my colleagues knit quickly and furiously through tedious administrative meetings. Observing her grim expression, I was reminded of Madam Defarge in Dickens’ Tale of Two Cities. With her stitches, Madame Defarge secretly knits a register of the names of the revolution’s intended victims, those who were to be executed. When she is asked about it, she claims it is just a pastime, but later smiles and says she may find a use for it and, if so, “I’ll use it.” And she did.

During the seventeen days that my husband was in hospital before he died, I sat beside him, knitting a long scarf. Nothing fancy and somewhat uneven, it contained rows of stitching on patterned wool and served as the kind of mindless activity I needed through those long days and nights. After his death, I gave the scarf to my daughter, telling her that I had stitched all of life and death into it. I don’t remember ever seeing her wear it, although she says she has done.

Yarn representing the thread of life is a very old concept. The mythology of Ancient Greece tells the story of the Morae, or the Fates, who spin, measure, and cut the length of each person’s life. https://mythagora.com/bios/fates.html

These days many lives are being cut short, and it seems that many things are falling apart. Unraveling. I think of Macbeth’s longing for the Sleep that knits up the ravell’d sleave of care. The sleep, it suggests, will knit up and make new again all that has been unravelled.

Knitting is a useful image for what we will need to do to heal our damaged world. We will need to bring things back together so that the thread of life can continue. We will have to integrate a lot of pain and loss and knit it all together. The broken world, just like broken bones, will tale time to be knit together.

And how will we do it? Sitting out on my patio this afternoon, I watched the trees swaying gently in the light wind and thought of how much we have been learning recently of the ways in which trees and fungi are communicating and knitting their connections underground. Dr. Richard Atleo has proposed that the Nuu-Chah-Nulth people’s core belief of Tsawalk, “everything is one,” offers a foundation for building more equitable and sustainable communities: https://www.ubcpress.ca/principles-of-tsawalk

Maybe that’s a place to start. Acknowledging that everything is one, and honouring the connections we have and will need to forge in the future. And all those ravell’d things that we will have to knit up.

It looks like we’ll all have to stick to our knitting for the next many months and years to come.