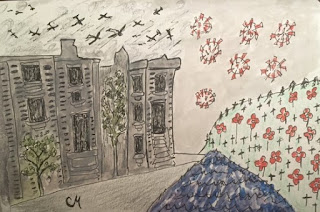 Remembrance Day was different this year. With no public gatherings permitted, only a few people congregated at the citadel. But, from a safe distance, on front porches or in our homes, people still observed the two minutes of silence and thought about the wars in which so many young people risked their lives. So many were killed or crippled for life. Six members of my family as well as my husband’s father served in the military in two world wars. They showed remarkable courage. In different ways, they also all felt lifelong effects from that service.

A friend sent me the link to   Joh McDermott’s song “The Band Played Waltzing Matilda:

I find it one of the most moving and poignant of the many songs that decry war. Buffy Ste. Marie’s The Universal Soldier, for which she was apparently blacklisted when it was first performed, also never fails to bring tears to my eyes:

Although we don’t want to glorify war, we rightly celebrate the courage and sacrifice of the young soldiers who gave their lives to the war effort. And we also recognize the contributions of the people who stayed at home, waiting for their loved ones to return. We heard countless stories of hardship during the blackouts. People endured the absence of parents, spouses and children, the fearful times in bomb shelters, the rationing, and all the many losses, small and large.

They endured. They put up with a lot of limitations to their freedom. I never heard of anyone saying, “I have a right to refuse to pull down my blinds.” They knew they were all in it together and they followed the rules.

We will put things back together when the Covid crisis lessens and we move on to what people are calling “the new normal.”  In the meantime, we must all do as our parents and grandparents did in those hard times before us.

Remember the people on the front lines, our health care and other essential workers.

Endure. Be patient. Think of others. Follow the rules.

And then, if we’re lucky, we’ll have things to remember.