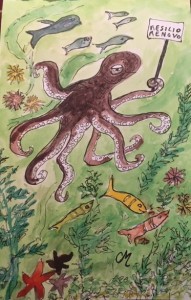 I’ve always loved octopi, and have spent long sessions at aquariums watching and talking to them.

Everything about the octopi fascinates me: the smooth, graceful approaches, the slow undulations of their many tentacles, and the swift shape-shifting retreats. I’ve heard that they can recognize and become friends with humans and, on a holiday to Tacoma many years ago, I became convinced that a large octopus in the aquarium at Point Defiance Park knew and liked me. “Look,” I said to my husband. “See how he rushes up to the glass when I come close. He changes colour and folds and unfolds his tentacles.”

My husband was unconvinced. “No,” he said, “It’s anger that changes his colour. He’s racing towards you because he wants to break through the glass and strangle you.”

Nonetheless, my infatuation continued and I had yearnings, like those of Ringo Starr, to be under the sea in an octopus’s garden. I frequently sang along with Ringo: We would shout, And swim about, The coral that lies beneath the waves.

My infatuation returned when I watched Netflix’s extraordinarily beautiful documentary, My Octopus Teacher. It’s a film we need right now, not just for its poignant love story but also for real lessons that might help us in coping with the pandemic.

In this film, I was fascinated when the diver and director Craig Foster hesitantly extends one arm and the octopus slowly unfolds her own, reaching out to touch his hand and stroke his arm. Tears came to my eyes and I felt a wave of shock at the encounter, one which was similar to that described by Annie Dillard in her brilliant essay Living Like Weasels:

It seems we experience something positive and transformational when we’re confronted with what is foreign and frightening. And maybe such encounters can change how we perceive the world and how we live in it.

The underwater world is dangerous. Foster decides not to intervene when a predator shark follows the octopus. At first, the little octopus hides under a rock but the shark manages to get close enough to bite off a limb, leaving the creature bleeding and seriously weakened. Yet, after a while, she recovers and soon a tiny tentacle appears. Her regenerative powers have produced a new limb.

Later in the film, we watch the octopus cleverly dodge a predator shark. She faces the danger directly, jumping onto the shark’s back, hanging on, and holding fast until the situation changes and she’s able to escape.

We’ve all suffered painful amputations over the past six months. Humans can’t grow new limbs but, like the octopus, we can find ways to rebound and to experience renewal. Remembering that the octopus was an important symbol in Ancient Rome, I find myself thinking of the Latin words resilio and renovo. Rebound. Renew.

By being smart and hanging on.

And holding fast until things change.