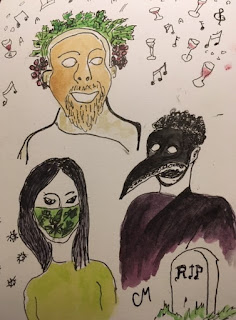 Masks are in the news almost every day: who wears them. and who doesn’t..

Recently a journalist made reference to the Premier’s mask slipping during his explanation for the unnecessary snap election in B.C. In Ali Smith’s brilliant novel Summer, a 13-year old boy states that all politicians wear masks. It got me thinking about masks and our reaction to them. About politicians and the things they say.

As an MP, shortly before being elected Prime Minister, Boris Johnson compared women who wear the burka to “bank robbers” and “letterboxes.” We’ve now become used to politicians making racist remarks about foreigners, and also to them expressing a distaste for masks.

Masks are tricky. We’re sometimes frightened when we can’t see someone’s full face, even though our view of a person without a mask is often of a persona, rather than an authentic self. In Jungian terms, the persona refers to a mask we wear in public to impose a false image about ourselves. As Jung said, a persona is the individual’s system of adaptation to, or the manner he assumes in dealing with, the world. The word persona derives from Latin and originally referred to a theatrical mask.

Wiktionary connects the etymology of the word mask with the Middle-French masque (“a covering to hide or protect the face”), the Italian maschera (“mask, disguise”), Medieveal Latin masca, mascus (nightmare, ghost”), and the Old English grima (whence “grime.”) The connection with grima is interesting, as that was the name of one of Tolkien’s most unpleasant characters in Lord of the Rings. Grima was said to be a proficient liar and good at persuading people. Politics, yet again.

In indigenous cultures, a mask frequently carries ceremonial meaning, and the storyteller or dancer who wears a mask may represent a bear, a raven, an eagle or an ancestor. Often these masks propose the possibility of change, as with the contemporary Transformation Mask by Nuxalk artist Marven Tallio which is currently at the National Gallery on loan from the Canadian Museum of History: https://www.gallery.ca/magazine/your-collection/at-the-ngc/guiding-the-gallery-elders-community-members-and-indigenous. Even viewed digitally, such a mask conveys powerful authority and significance.

There are, of course, lots of references to masks in theatre through the centuries. I especially like the ones related to Dionysus who was much admired in ancient Greece, Earlier this month a 2,300 year-old mask was found in Turkey and is believed to have been used in a ritual ceremony involving Dionysus: https://www.dailystar.co.uk/news/world-news/ancient-god-archeology-greece-turkey-22740505

Dionysus was a popular god, being associated with wine, music, ritual madness and parties of every kind. People wore masks in his honour, and he sometimes wore them himself. In the Bacchae, Dionysus wears a feminine mask and disguises himself effectively as a foreign stranger. He’s a god for all seasons, and legend has it that paying homage to him frees one from secret desires and regrets!

I found when I was searching for images of masks at art galleries – an enjoyable pastime – that I had to scroll past many, many advertisements for contemporary facemasks before reaching the actual site of the gallery. I learned that art galleries and museums are all now selling very beautiful face masks as fundraisers to offset financial losses caused by reduced attendance.

There’s great variety in contemporary masks, including one being created by an Israeli jeweller for a very wealthy young American man who requested that it be the most expensive mask in the world. I believe it shall be, since it will cost 1.5 million dollars and be made of 18-karat gold encrusted with 3600 white and black diamonds. One can find many much less expensive yet still whimsical face masks: designer masks, artistic masks, some with political messages, and some supporting charities. Unlike the terrifying bird-beaked masks worn by doctors during the Elizabethan plague years, many of these are beautiful and serve as fashionable accessories.

The mask is clearly an important symbol of our time. Future dictionary definitions may well include a reference to “a face covering used to protect the wearer and others against Covid-19.”

I was pleased to read a brief from the Cascade Institute at Royal Roads which found that Canadian attitudes for and against wearing masks in response to COVID-19 are, in contrast to the U.S., dispersed across the political spectrum, and that the majority of Canadians support wearing masks in public spaces: https://cascadeinstitute.org/isc-brief/behind-the-mask-anti-mask-and-pro-mask-attitudes-in-north-america/

Masks have always been with us. Why do we wear them? Well, why not? These days they signify respect, common sense, care for others and hope for the future.