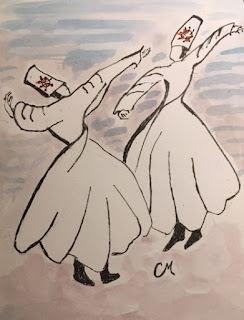 The virus makes me cranky for many reasons, one of which has to do with the way our language is changing.  I hear people speaking about how things will be when we get “back to normal,” and, in my cranky way, I feel obliged to point out that “back” and “normal” are words which must be removed from our everyday lexicon because we will not be going back anywhere, and because what once was normal was often not good for a great many people. Nor for the environment.
At the same time, we are having to get used to a batch of new words: self-isolating, curve-flattening, social distancing, infodemic, covidiots, doomscrolling, etc.
With the virus numbers rising it’s hard not to get into doomscrolling,while we try to sort through all the disturbing news and conflicting information. As Nicole Ellison pointed out in a recent issue of Wired Magazine, there’s a “lot of demand on cognitive processing to make sense of this. There’s no overarching narrative that helps us.”
https://www.wired.com/story/stop-doomscrolling/
Our activities continue to bring us new words. Many of us are spending a lot of time zooming and hoping to stay away from zoombombers and, at the end of the day, needing to settle down with a couple of quarantinis.
Even the Oxford English Dictionary broke its usual cycle of adding new words every four months so as to add a slate of new words and terms which have come into use during the coronavirus outbreak:
https://www.9news.com.au/world/dictionary-coronavirus-oxford-english-new-words-added-social-distancing-flatten-curve/1b89a0bb-8295-47f9-a739-d472865fdf2b
It’s understandable that, at this time of unprecedented change, new words become necessary. We need to change with the new world and the new words.
What I don’t like is the way some old words are being used. My friend Bill drew my attention to the overuse of the word pivot, for instance. Until now it was used primarily to describe the central point on which something turns or oscillates and, only secondarily, as a verb meaning to turn, as if on a pivot. It was used infrequently. Now any change is called a pivot, and the word appears so frequently in news about politicians that most public figures appear to be whirling dervishes.
We are dealing with constant change, and maybe we’re all feeling and behaving like dervishes these days.
I’m now described as compromised, because of my respiratory and cardiac issues. Compromise used to mean a settlement of a dispute or accepting standards that are lower than desirable. Sometimes it meant the weakening of principles, or a shameful or disreputable concession.
These days it’s used primarily to refer an impairment to the immune system. People worry about visiting me or having me participate in certain activities because I am compromised. They check up on how I am doing because I am compromised.  I’ve heard the word compromised more in the past 5 months than in more than 7 decades, and I don’t like it.
It implies that someone is fragile and vulnerable, which is not how I like to think of myself. Nor do I think of myself as a person who easily lowers her standards.
On the contrary, with regard to the virus, I respect the advice given by our health professionals and I follow the rules. I won’t compromise my principles. On these, I will not pivot.
Do new words and changed usages really matter? Probably not. Language evolves, and we must evolve with it. I’m ready to make that concession. I’ll make that compromise.
But I myself refuse to be considered compromised.

And covid crankiness encourages me to complain about it.