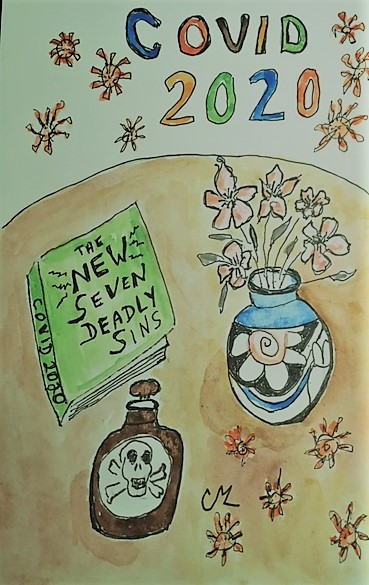 The idea of the Seven Deadly Sins has long been of interest to me. I can’t remember when I first heard of them. Maybe in The Canterbury Tales, in which The Parson refers to them and offers remedies against them. There are references to the deadly sins in Faust, with Mephistopheles presenting a show of them to entertain and tempt Faust.
The representation of them in the images in Hieronymus Bosch’s painting of the Deadly Sins and the Four Last things (Death, Judgment, Heaven and Hell) has always stayed with me.
https://arthistoryproject.com/artists/hieronymus-bosch/the-seven-deadly-sins-and-the-four-last-things/
I’ve prided (which is the worst sin, according to Chaucer’s Parson) myself on my ability to quickly recite the Seven Deadly Sins: Pride, Ire, Greed, Lust, Envy, Gluttony and Sloth. This is a trick which results from my habitual acronymizing, hence PIG LEGS.
Through the years, I’ve been guilty, to a greater or lesser extent, of each of those sins.  I regret those misbehaviours, and yet they don’t seem so very bad to me. They’re certainly none of them attractive behaviours, but the list is a bit old-fashioned. In the crises we’re facing today – the virus, the climate, the economy, racism and violence — there are much worse sins.
I propose a list of New Deadly Sins which are worse, because they are much deadlier.

And let’s make it simple by focussing on three main areas:
1. For starters, Complacency and Carelessness are the deadliest. That’s why the virus is spiking again. I heard an interview with someone in Australia who was asked about the causes of the spike which resulted in a declared state of disaster and new lockdown measures: she answered in one word: complacency. We were congratulating ourselves on how well we had done, she said, and we got careless and started to ignore the guidelines.

Complacency and Carelessness are what we’re seeing here in our province right now. We think we’re doing well, and we just decide to forget about the rules so as to enjoy the pleasures to which we are accustomed.
These sins are closely related to two others: Smugness andSelfishness, which limit our thinking and prevent us from being responsible citizens.
2. Cynicism and Disrespect are increasing, perhaps as a result of virus fatigue. People ask: do the experts really know what they are talking about? And, if so, why is there so much inconsistency?

Becoming cynical and disrespecting experts can lead to foolish theories about conspiracies and hoaxes which may result in very deadly behaviours. Sometimes one’s own death.
3. Nostalgia is deadly. Looking back to how things used to be will not help us. We’re not going to be going back to the way things used to be. It doesn’t help to have old people recalling the past and bleating on about the fact that young people won’t have the carefree world they inhabited in their long-ago youth. There was plenty wrong with that old world, much of which led us to the problems we have today.

We old people owe it to the young to support them in moving forward.
I’m not suggesting that we should forget all about PIGLEGS, and I don’t yet have an acronym for the new deadly sins. But I think we should keep them in mind: Complacency, Carelessness, Smugness, Selfishness, Cynicism, Disrespect, and Nostalgia.
Remember, and try to avoid them.

6 thoughts on “The New Deadly Sins”