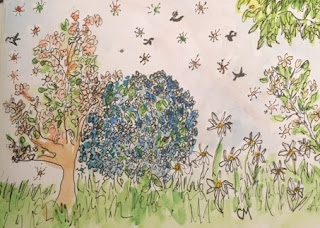 To update you on our current initiative on the planet humans call Earth, as reported on post March 15, our initiative progresses well. Close to 15 million people have contacted the virus and over 600,000 people have died. The numbers increase daily and rapidly.
In my previous dispatch, I reported that the convergence of human responses to our activities(the alleged climate crisis, the resurrection of indigenous wisdom, reduced plane travel, lowered investments in oil and gas, along with humans staying at home) could have the effect of extending the life of the planet and offering humans a more sustainable future. I am pleased to report that I no longer have that concern. Humans are again travelling, flying in airplanes, driving their cars, gathering in public places and circulating broadly. Accordingly, we too are in wide circulation, depending as we do on their assistance in transporting us. They are social beings and so they do like to be out and about, which is encouraging.
Although we make steady progress in our advancement, it’s difficult to predict just how this species will respond to the continuing combat. Sometimes, and in some places, they appear to work collaboratively to try to defeat us. At other times, they fight with each other about issues that are difficult to understand. Whether or not they should wear masks or follow other medical directives is a point of disagreement; they have demonstrations and riots about this and many other matters. The colour of their skin is increasingly the focus of activities, but the causes are perplexing. The diversity of their appearance actually makes them more interesting and perhaps more attractive, but the species which lacks colour, though in the minority, continues to try to dominate the others. They seem preoccupied with colour and so the illustrations they make of us show us as being red, or red and green, or yellow or purple. However, because we are very tiny, especially in comparison with these mammoth creatures, we are completely without colour to them. Transparent and invisible. Which is, of course, a great asset to us.
It is hard not to have some compassion for humans. They are fickle and unpredictable creatures but impressively resilient. Although not always thoughtful and frequently uncooperative, they are given to bursts of generosity to each other and even to some other species. At the same time, they are destroying much that is beautiful and life-affirming on their planet as they lumber about in their clumsy, thoughtless and, for the most part, uncoordinated manner.
Again, I will note that, as the most abundant entity in the vast universe, we have no reason to fear these ungainly creatures. We carry on with confidence that our mission to support their small planet will ensure that the diversity of other animals and plants can continue to exist.