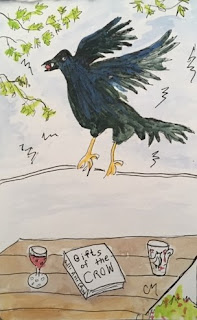 I always liked that old song of Leonard Cohen:
Like a bird on the wire
Like a drunk in a midnight choir
I have tried in my way to be free
I liked it early on, and also much later:
https://www.youtube.com/watch?v=BmPUu-rMpWA
https://www.youtube.com/watch?v=BGvwvxA83Cs
I’ve been really appreciating the sight and songs of all the birds near my patio, but recently that Cohen song took on a different meaning for me. I awoke early with my alarm system going off because of a power outage. (Because my alarm system is old and has all sorts of problems, it is mostly disconnected but it still connects when the power goes off, just long enough to set off a brief alarm.) I got up and tried to make the beeping sound stop, and then checked with BC Hydro online and found that the problem, as was the case with another outage two weeks ago, related to “contact with a bird.” A bird on the wire.
BC Hydro was great; they posted regular updates and got a crew out to fix things quickly. But a power outage during a pandemic is worrying. It makes you wonder if maybe the infrastructure upon which we all depend might just suddenly disappear. And then I started thinking about that old Hitchcock film “The Birds.” Maybe the birds hate us, I thought. Maybe they will be glad when we are gone.
I was a bit aggrieved because, only a few days earlier, I had signed up to make monthly contributions to Birds Canada:
https://www.birdscanada.org/
However, I’m still glad to be supporting Birds Canada, because it’s an excellent organization the mission of which is to conserve wild birds through sound science, on-the-ground actions, innovative partnerships, public engagement, and science-based advocacy.
Birdsong is a great comfort these days, and the sight of so many birds lifts my spirits. I recognize that my feelings and fears with regard to the power outage were irrational and likely they have to do with an unacknowledged agitation I feel because of the virus and the uncertainty with which we are living these days.
We are all wired! According to my dictionary, that means being in a nervous, tense, or edgy state. It also means being connected by wire. For those birds on the line it might mean sudden death. For birds in a cage it might mean beating their wings against the wires as described so poignantly in Paul Laurence Dunbar’s poem, Sympathy:
https://www.poetryfoundation.org/poems/46459/sympathy-56d22658afbc0
Sometimes we are agitated, tense and fearful. Even Dr. Henry noted the other day that the situation was “nerve-wracking for all of us.”
We are birds on the wire. Occasionally, we need to acknowledge that.