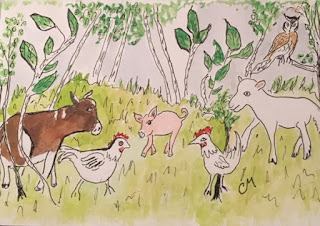 While most of us are self-isolating at home, all over the world there are animals taking to the streets. Wild boars wander around Barcelona, silka deer are seen on the streets and subways in Nara, Japan, gangs of wild turkeys are swaggering around the streets of Oakland California, and pelicans are gathering on Peruvian beaches. The virus that has us humans hunkering down at home has given free rein for many birds and animals to take over our territory. I’ve particularly enjoyed the videos of wild goats exploring the Welsh village of Llandudno:
https://www.ctvnews.ca/sci-tech/wild-goats-take-over-welsh-town-amid-coronavirus-lockdown-1.4876257
When we humans return to those places, we may need to develop better relations with our animal neighbours who are presently out there. I find myself thinking of Dr. Doolittle’s song:
If we could talk to the animals, learn their languages
Maybe take an animal degree.
Many vegans and animal rights supporters have spoken out about the dangers of zoonotic diseases, meaning those diseases started in animals before spreading to humans. Zoonotic diseases rank among the world’s most infamous examples: HIV, SARS, Ebola, and H5N1 influenza, for example, all percolated in wildlife before close interactions with humans spawned international outbreaks. And there have been others: the avian flus related to chicken farming, swine flu beginning on pig farms, mad cow disease, and so on.
The Guardian recently published an interesting article exploring the relation between factory farming and the coronavirus.
https://www.theguardian.com/world/2020/mar/28/is-factory-farming-to-blame-for-coronavirus
Recently there have been social media claims that COVID-19 could have been prevented if people ate less meat. These claims have been countered with suggestions that they are too simplistic or “partially false.” But, as the Guardian pointed out, they may also be “partially true.” And, if so, it may be the case that, as a friend suggests, “Animal culture represents a vast petri dish in which the very bugs that are killing us are being created.”
Maybe it’s time to take a moment to reflect on how we treat our animals. A vegan friend says, “It’s the cruelty that boggles the mind. How can something that’s so cruel be anything but wrong? Why can’t we leave the animals alone?” Although I am not a true vegan, I can’t help but agree. Keeping animals cooped up and penned in at very close quarters is cruel. Even the creatures that are “kindly” or “gently” killed deserve better.
Easter is coming up in a week with its attendant imagery and messages of resurrection. Perhaps, when this epidemic is over, we might consider no longer crucifying our animal friends — for their sake and for ours. We might create a more humane planet on which we would care for all species. We might even try talking to the animals.