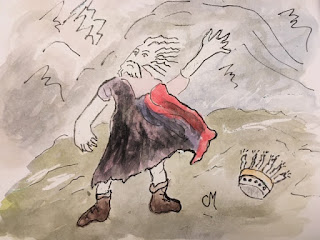 These mornings, when I first awaken, I sometimes feel a little bleak. And when I think of bleakness, I often think of King Lear. In particular, I recall the scene in which when, out on the heath, battling the elements of nature, Lear thinks of the poor and wonders How shall your houseless heads and unfed sides/Your loop’d and window’d raggedness, defend you/From seasons such as these? He realizes, tragically, that he has overlooked issues that were once within his power, and cries O, I have taken/Too little care of this.

Some people think the point of the play is that King Lear gave away his money and power too soon, but what the play really presents is a portrait of a man who, because of his egotism and narcissism, has never been able to distinguish between good and evil. Blinded by the fawning flattery of his two heartless older daughters, he fails to see the honest love of his youngest and thus gives everything to the forces that will destroy him and his kingdom. The Fool, loyal to the King, speaks truly to Lear and challenges him: Thou wouldst make a good fool and Thou shouldst not have been old till thou hadst been wise.

The play has a lot to do with wickedness and malevolence. Perhaps the most shocking scene Shakespeare ever created was the one in which Goneril and Regan bind Gloucester and gouge out his eyes. The line Out, vile jelly! Is hard to forget! But there is also love and loyalty. If Goneril and Regan are led only by appetite and ambition, Cordelia is guided by honesty and devotion. Gloucester is faithful and trustworthy, as is his son, Edgar, disguised as Mad Tom so that he can help his father.

It seems to me that the Covid crisis is making us all more aware of good and evil and, for the vast majority, it has given us a reinforced desire to do good. We are becoming aware of some of the things that have misled us. Like Goneril and Regan, we have suffered from too much appetite and ambition, but now every day now we see both small and large acts of kindness and generosity.

My teenage granddaughter sent me a link to a Guardian article that argues that Shakespeare may have written King Lear during the plague:
https://www.theguardian.com/stage/2020/mar/22/shakespeare-in-lockdown-did-he-write-king-lear-in-plague-quarantine
Certainly the bubonic plague may have had Shakespeare in quarantine at the time the King Lear was written, a time when the theatres were closed for many months. It is suggested that he also wrote Macbeth and Anthony and Cleopatra during this time, which certainly sets the bar quite high for what the rest of us might be achieving during our own dark days.
And our days are not without the possibility of a happy oucome. At the end of King Lear, Edgar proposes that the tragedy requires all to conduct themselves with honesty and authenticity: The weight of this sad time we must obey, Speak what we feel, not what we ought to say. It seems likely that we too will be changed for the better when the crisis has ended.

Very often we hear people speaking now about how thankful they are for their family, friends and neighbours. We feel fortunate to live in Canada, and are very grateful for all the health care workers and so many others who take great risks to make this plague much more bearable for the rest of us — and much more bearable than the conditions many had to endure in previous times. I feel lucky for all of this and for a great many people in my life, especially my granddaughter who sends me Guardian articles to keep me challenged!