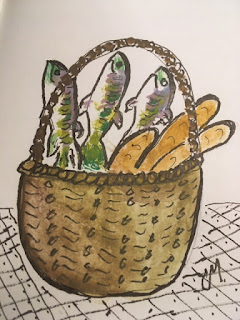 Recently I wrote a letter to the editor of our local newspaper to praise the work of our community food bank, and the editor chose to print it as a Guest Colum:

I was pleased to make the point that the Three R’s of Reduce, Re-use, Recyclehave been augmented by two additional actions which are Refuseand Repurpose, and I proposed that Loaves and Fishes adds a further and important activity which is Redistribution.

In these challenging times, Redistribution may be the most significant thing we can do. With the crash of the stock market and the resultant loss of employment, many people will be greatly in need of assistance. And just as there is an abundance of food which, through the work of organizations such as Loaves and Fishes, is redistributed, there is also an abundance of wealth in the hands of a very few people. It too can be redistributed. Let’s support the politicians and governments that introduce measures to redistribute that wealth. The uber-rich can afford to share!

In the meantime, even those of us who have much less money to throw around can participate in redistribution by being more than usually generous to homeless people and the organizations that support them: the shelters, the foodbanks, and the social agencies who help out. If you can afford to buy groceries, you can afford to ask the cashier to add a few dollars for the food bank.

It occurs to me now that, by performing these R’s, we may discover a seventh R: Redemption.

These days we mostly hear about Redemption in terms of redeeming Air Miles or Aeroplan points in order to get free trips. But practicing the six R’slisted above offers a different kind of redemption. Not a trip to Rome or Paris or Thailand — nor even an admission to Heaven — but perhaps it will give us a sense of having atoned for some of our thoughtlessness. The word comes from the Old French ’redimer’ which means to deliver or to buy back.