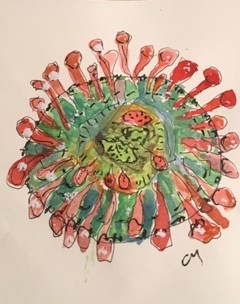 Lab Dispatch ABCV2020xv7v
Our current initiative is progressing well with successful activity in more than 100 countries and over 4,000 deaths reported. Almost 115,000 individuals have contacted the virus and it is spreading rapidly despite uncoordinated human efforts at containment. It is possible that this virus could be the downfall of the human race but it remains more likely that their own behavior will bring about their end. Humans are consumptive beings, and their self-knowledge is slight.
Humans consider us to be another form of life, which is interesting because that is similar to our perception of them. We define them as a large, slow-moving life-form with limited capacity for social innovation and collaboration. Because they are so disproportionately hefty, especially in relation to their intelligence, they think of us as invisible, although they do now have mechanical aides which allow them to catch glimpses of some of us. Incidentally, humans are an unattractive species, whereas we small creatures are extraordinarily beautiful and diverse. Age cannot wither nor custom stale our infinite variety, as one of their species wrote about an apparently exceptional human being.
As the most abundant entity and oldest life form on this planet, as well as a powerful presence in the vast universe, we have no reason to fear these ungainly creatures. Remember the dinosaurs? Despite the hubris that causes humans to seek endlessly for means to destroy us, they will continue to be at our mercy in the little time that remains before they ultimately destroy themselves.

There are some causes for us to be concerned, however. On earth, there is currently an unusual convergence of interests resulting from our coronavirus (one of our more captivating species), the alleged climate crisis, and the resurrection of indigenous wisdom. What evolves from this convergence may extend human life beyond what currently seems likely. For example, investments in oil and gas are plummeting, plane travel is decreasing, especially on flights from Britain and North America to Northern Italy, Frances, Singapore, China and South Korea, and every day more and more airlines are slashing flight itineraries.  Conferences are being held using distance technology and many people are focusing their attention on the land where they make their home, on a sense of place, and on an appreciation of their environment. What humans call The Stock Exchange is reacting wildly to this new behaviour, and there is some understandable concern and even panic about the short-term effects that may be experienced.

At the same time, from our perspective, we are also concerned that, if these trends continue, we will need to reconsider our projections, as we may have counted too heavily on the extinction of human life resulting from their addiction to travel, to comfort, and their boundless addiction to consumerism. Unless our current initiative is extremely successful, humans may have a longer future than we have envisioned.

In conclusion, however, remember that humans constitute no threat to us. On the contrary. But it would be nice to be rid of them sooner rather than later, so that the planet can thrive through the flourishing of other animals and plants with whom we have a more congenial relationship and for whom we have greater admiration.