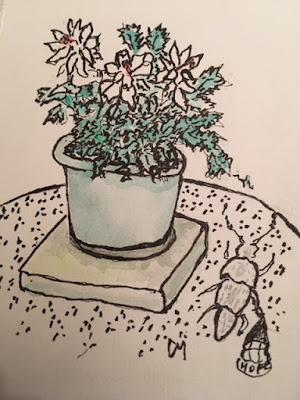 Last December I was given a Christmas cactus which had small white buds from which magnificent white blossoms shot forth – magically, it seemed, orgasmically, as each flower reproduced itself. After the blooms died, I put the plant out on my patio where it endured rain, snow, ice, freezing temperatures, and then heat and blazing sun. I had ignored it, forgotten about it, but a month ago I brought it inside, admiring the shiny green leaves that had lasted through the year. Soon small white buds reappeared and, despite my neglect, it bloomed even more profusely than the previous year.
The thought of it, a pleasing and resilient evergreen plant that asks for nothing, demands no care at all, responds to abuse with a generous cascade of blossoms! It made me wonder. If I were God, I decided, and I’d produced the Christmas cactus, I would not have gone on to create humans.
The world is in dire shape and it’s easy to feel hopeless. We humans have done great damage to our planet but there is yet much beauty out there and it’s worth putting in some effort to salvage what we can. And it starts with maintaining hope.
When I sat down to try to sketch my Christmas cactus, I’d just learned that a beetle had been named after Greta Thunberg, that tireless young advocate for action on climate change. So, I decided to include the Greta Thunberg beetle in my sketch and let it carry the message of hope. Because even if it is true, as Thunberg has said, that hope is not enough, action can spring from hope. It’s a starting point in dark days.
In her new book, Almost Everything, Anne Lamott writes, “Hope begins in the dark, the stubborn hope that if you just show up and try to do the right thing, the dawn will come. You wait and watch and work: you don’t give up.”
She’s right. Humans can’t compare with Christmas cactuses, but we do have the capacity to hope and to act. We need to show up and we need to act. And positive action helps us to continue to be hopeful.