In the Sixties, I went on marches to protest the war in Viet Nam. In the Seventies and Eighties, I went on peace marches and anti-nuclear protests. It always felt exciting to be with a group of like-minded people “speaking truth to power,” and at times it seemed that perhaps we were being heard, at least briefly. More recently we’ve had the Occupy movement and the Women’s March, which were important but had little effect.
Friday’s school Climate Strike, inspired by Greta Thunberg, felt very different from all those previous demonstrations. Surely a global demonstration of 1.5 million in 123 countries in 2,000 cities may serve as a turning point. The attendance in front of Nanaimo City Hall included almost 200 people, a far cry from the 150,000 who turned out in Montreal, yet enough to make a strong statement. And it was good to see three of our city councillors speaking in support of the strike.
“Adults are stealing our future,” said one young speaker, while generously making a point to thank the grey-haired people who turned up to support the strike. I think he’s right. My generation’s  contribution to environmental degradation is certainly something about which we should be ashamed.  Also shameful is the fact that it has taken children to send out the message that climate action is urgently needed.
Or course there are Twitter trolls who question Greta Thunberg’s motives and suggest that she is a pawn of various political interests, but from all reports her integrity seems to be solid. Others claim that she has exaggerated the problems and that her facts are inaccurate. This fact checker says Greta “has done her homework” and that for the most part her facts are backed up by science:  https://faktabaari.fi/greta-thunberg-has-done-her-science-homework/.
Will she be awarded the Nobel Peace Prize? I hope so. But, most of all, I hope that these young people don’t give up their protest. I hope they keep the strike going until we comfortable elders are also moved to take action.
I can’t remember who said, “The enemy of good is not evil but comfort.” I’m pretty sure, though, that the time has come for us all to get a lot more uncomfortable. 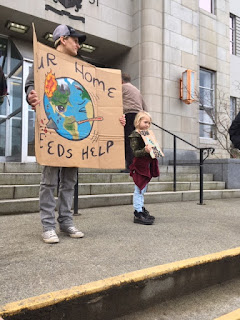