Questions for Ariadne: The Labyrinth and the End of Times, Revised Edition

First published by Outlaw Editions in 2011, Questions for Ariadnequickly sold out. In this new edition, Matthews has added an additional chapter, a new foreword and an afterword co-written with Dr. Kimberly Lowelle Saward.

Carol Matthews is the author of four books of memoir, including The First Three Years of a Grandmother’s Life, Reflections on the C-Word, and a collection of short stories, Incidental Music (Oolichan Books). Her short story “The Boat, as it Happened,” won Prism International’s 2017 Jacob Zilber Prize for Short Fiction. Her latest book, Minerva’s Owl: The Bereavement Phase of my Marriage, was published by Oolichan Books in 2017.

Kimberly Lowelle Saward, Ph.D., has been working with labyrinths since 1995, earning her doctorate in 2003 with a study of labyrinth walking as a transformative practice. A former president of the international Labyrinth Society she travels frequently between the USA and Europe as a speaker and an organizer of labyrinth-oriented conferences, pilgrimages, and events.
Q

Minerva’s Owl: The Bereavement Phase of My Marriage

In Minerva’s Owl, Carol Matthews reflects on Hegel’s observation that the owl of Minerva, the Roman goddess of wisdom, spreads its wings only at twilight. Understanding comes late in life and, as Hegel suggests, the past cannot be rejuvenated, only known. For Matthews, the knowing is helpful. Part grief memoir, part love story, this account is an exploration of how bereavement after a long-term marriage can be experienced as part of an ongoing relationship.
“. . . an original, startling and deeply thought-provoking work. There is an intimacy to her writing that invites the reader in almost as an eavesdropper. What we hear are our own thoughts and questions. What we are left with is a sense of peace – the kind that comes with the knowledge that, even in the darkest places, we are not alone.”

Questions for Ariadne: The Labyrinth and the End of Times

Questions for Ariadne includes elements of fiction, non-fiction, myth and memoir. Through conversations with the mythical Mistress of the Labyrinth, Ariadne, the author considers the story of the labyrinth and contemplates ways in which walking the labyrinth helps her to face advancing old age and approaching death. This exploration takes place in labyrinths around British Columbia and in Toronto. Although some of the characters are fictional, the labyrinth hobbyists, builders and writers are real, as are the author’s husband and granddaughter, and the labyrinths themselves.

Dog Days: Between the Lines

In the summer of 2001, Liza Potvin, a single mother, writer, and academic, took her two children to a monastery in India where she taught English to Tibetan Buddhist monks. Carol Matthews,a writer and consultant, community worker and retired academic, remained at home on a small island on Canada’s West Coast with her husband, Mike, and Victor, an energetic terrier puppy rescued by Liza and her children before their departure. The email between Liza and Carol reflects global tensions that arose as the world heated up after September 11, 2001, and the uncertainties that were arising in the personal lives of the writers, along with the adventures and insights of the errant puppy, Victor.
“. . . two candles: articulate, funny, occasionally wrong-headed, but always searching for what is right — and with such light.”

Reflections on the C-Word: At the Centre of the Cancer Labyrinth 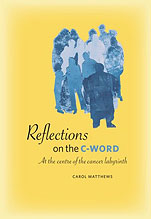 The First Three Years of a Grandmother’s Life